The greens were previously maintained by a competitor brand, but the club has since chosen Jacobsen equipment following a review by Robert Patterson, who has been the Course Manager at Royal Aberdeen for the past 18 years. 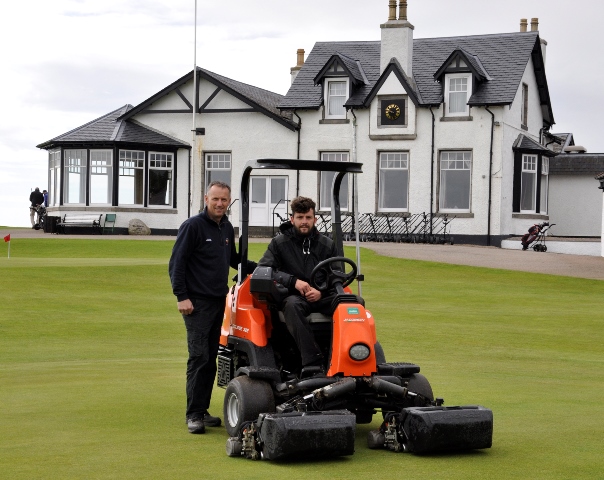 The club has hosted many prestigious competitions, including the Senior Open Championship in 2005, the Walker Cup match between Great Britain & Ireland and USA in 2011 and the Aberdeen Asset Management Scottish Open in 2014; it is due to host the Amateur Championship in 2018.

Commenting on his decision to change machinery supplier for his greens mowers, Robert said, “We were reluctant to make the change at first, because we have a very good relationship with our current supplier, but ultimately, we needed to improve the quality of cut on our greens, which is why we bought the Eclipse 322 mowers, and I couldn’t be more pleased with the results.

“We are currently using Jacobsen’s 15-blade cylinder and have a cutting height of 4mm in the summer and 5.5mm in the winter, which works well for us. We also have Jacobsen’s bi-directional groomer and brush fitted to both machines. That’s a decision I made after seeing a demonstration by Dr Thom Nikolai, Turfgrass Professor at Michigan State University, on brushing greens whilst I was over in the United States. Jacobsen has shown that it is clearly up-to-date with the latest research and technology, so we have chosen this set up, which reduces the stress on the turf and further improves the finish on our greens.”

Continuing to comment on the improvement to his machinery inventory, Robert added,
“Our previous greens mowers were not giving us what we wanted. The technology was becoming outdated, and with increased expectations from members and visitors, I made the decision to move to the latest technology available on the market. I had a two-week demo with the Eclipse 322, and it became clear to me that we had to move forward with this machine to provide our members and visitors with the best quality finish on greens.

“We compared our previous greens mower with the Eclipse 322 in a head-to-head test, and there was such a significant difference in favour of the Eclipse; the decision to go with the Jacobsen mower was very easy. Aside from the quality of cut, I have been very impressed with the overall design of the machine; the swing-out centre unit makes it easy to maintain, and no oil, quite literally means no oil leaks!

“Fuel economy is excellent. We are now using between 30% and 50% less diesel to cut all 36 greens and putting green, which has cut our fuel consumption considerably. This is great because it gives me more money to invest in other areas, and it’s a step in the right direction in terms of becoming more environmentally friendly.”

A major concern for Robert and his team was the level of support and back up he would receive after the machinery had been delivered.

Commenting on the service provided by local dealer, Fairways GM, he said, “Fairways has been excellent. I know that I can pick up the phone if I require assistance, and it will have a representative with me the same day. I have a three-year warranty on my Eclipses, which gives me peace of mind. I really can’t speak highly enough of Fairways as a dealer, and Jacobsen, as a manufacturer of high quality, innovative machinery.”

Royal Aberdeen Golf Club was founded in 1780 as the Society of Golfers at Aberdeen and became the Aberdeen Golf Club in 1815. Until 1888 members played on the Queen’s Links close to the city before moving across the River Don to the links at Balgownie. The Course was originally designed by the Simpson Brothers, Archie and Robert of Carnoustie and later re-bunkered and lengthened by James Braid. Hawtree & Company are now engaged as the Club’s architects to ensure that the classic Balgownie links keeps pace with the modern game. The club’s ‘Royal’ designation was awarded by Edward VII in 1903.