January 24, 2017, marks the 90th anniversary for the Club Managers Association of America (CMAA), the largest professional association for club management professionals. CMAA has evolved from its original roster of 358 members to 6,700 members throughout the US and abroad, all while remaining faithful to its objective to promote and advance friendly relations between and among persons connected with the management of clubs and other associations of similar character and to encourage the education and advancement of its members.

As detailed in The History of The Club Managers Association of America: The First 50 Years, it was in January 1927 that CMAA began. The first annual CMAA Convention began at 10:40 a.m. on Monday, January 24, 1927, at the Hotel Sherman in Chicago, IL. It was at this inaugural and organizational meeting of the Association that the first officers were elected, and Colonel C.G. Holden became the first President. 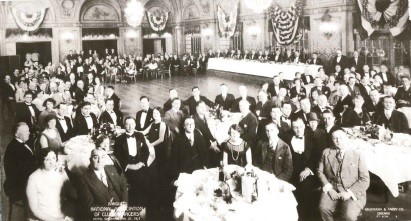 Following the elections and creation of bylaws, the Convention’s program included topics still familiar today, such as operating like a business, managing labor costs, communications among the club manager, greens keeper and golf professional, service charges and minimum house charges. Approximately 100 club managers attended this first meeting, and 10 percent of the first Convention attendees were female.