Acclaimed sports administrator Ken Schofield CBE has been named as the new Chairman of PowerPlay Golf, marking another significant step in the development of golf’s new format.

PowerPlay Golf has also announced that it will stage a press conference at The Celtic Manor Resort, City Of Newport, Wales, on Wednesday 13th April, at 1400 GMT. At the event, which will be streamed live on www.powerplay-golf.com and across the internet, PowerPlay Golf will unveil details of its new televised professional golf series, working together with international sports marketing giants IMG. Also to be revealed are the date, field and location for the opening event, details of a major global sponsorship deal, and the strategy to implement PowerPlay Golf at courses across the world. 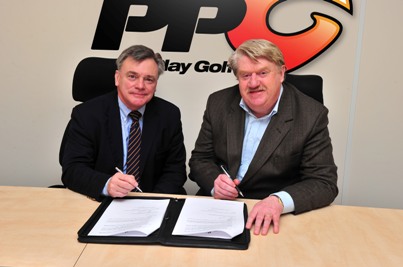 Ken Schofield commented: “Our research suggests that golf is ready for something similar to Twenty20 Cricket, which has given that sport a boost worldwide. We plan to take PowerPlay Golf global and to develop an exciting short form of the game that will not only appeal to TV audiences and broadcasters, but will also complement the long form of the game and will increase the amount of golf played around the world.”

Schofield, who earlier this week was announced as a director of the Asian Tour, was the Executive Director of The European Tour for 30 years. During his tenure he introduced innovative commercial strategies to successfully stimulate The European Tour’s Group revenue streams and lay the foundations for The European Tour to become a truly global brand. More recently the ‘Schofield Report’ published in 2007, looking into the state of English cricket, has been widely acknowledged as a key factor in the turnaround in the Test team’s fortunes.

PowerPlay Golf is played over nine holes, with two flags on every green. Golfers can score extra points by taking a limited number of ‘PowerPlays’ to the harder Black Flag, creating exciting risk-and-reward decisions on each tee.

After piloting in 30 countries, including ten PGA professional events, PowerPlay Golf secured major investment from Convers Sports Initiatives (CSI) in late 2010 to take the two flag game to the next level. CSI Chairman Vladimir Antonov said: “We’re delighted that Ken has joined the board of PowerPlay Golf. It is very much in keeping with our plans at CSI to develop one of the world’s leading multi-sport groups.”

Leading the way in 2011 will be three spectacular PowerPlay Golf TV events on three continents, in which superstar tour golfers of all ages and both sexes – including current Major winners and Ryder Cup stars – will play in each three-hour golf tournament.

These events are expected to create demand for the sport throughout the world’s golf clubs, and as the network of PowerPlay Golf Official Venues grows every golfer in the world will have the opportunity to play the game. A new website at www.powerplay-golf.com  will go live before the 13th April press conference.

Schofield joins original business founders CEO David Piggins and Executive Directors Andy Hiseman and Peter McEvoy OBE on the Board. “Ken brings with him a wealth of experience from the highest echelons of world golf and has an incredible track record in the business of sport. We have big plans for PowerPlay Golf and Ken will be instrumental in driving our strategy forward” said McEvoy, formerly a successful Walker Cup captain and world amateur champion.

PowerPlay Golf is also introducing a fresh new look to replace its pilot scheme ‘skull and crossbones’ logo. Its vibrant new logo epitomises the new era for the game of golf which PowerPlay Golf represents.