An Irish Golf Director is working around the clock as he plays a pivotal role in the launch of a $5millon tournament in China.

An Irish Golf Director is working around the clock as he plays a pivotal role in the launch of a $5millon tournament in China.

Paul McLoughlin is Director of Golf at the Lake Malaren Golf Resort which in October will host the Shanghai Masters featuring 30 of the world’s top players.

McLoughlin heads up a 220-strong golf operations staff and is helping to oversee the Jack Nicklaus redesign of Lake Malaren’s two championship courses – the first of which is being unveiled for the new tournament which carries a $2million first prize. 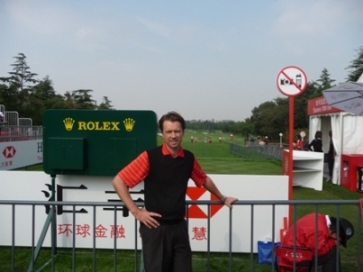 It is another exciting opportunity for the 34-year-old, who previously helped launch a new resort near Gdansk, Poland and has also worked in America.

“It’s an 80 hour a week job that involves all sorts of projects but it’s a very interesting and challenging role,” said McLoughlin who trained at Glencullen and was also head pro at Clontarf.

“The tournament is the first of a five year run of events and the resort, working with IMG, has ploughed a lot of time and effort into making it a success because we wish to fulfil all the criteria to host a European Tour sanctioned event at Lake Malaren from 2012-2015.

“Because they wanted to host a tour event they decided to start again with the two courses and completely rebuild them with a Jack Nicklaus design.

“The first course has been finished in time to host the tournament and once it is finished we will dig up the second and redesign that too.”

The state of the art resort has a three level club house and has just unveiled a dual directional driving range with 30 bays each side and an 18 hole putting green. It also has a 250 bedroom hotel.

McLoughlin credits personal ambition for driving him on his career but also revealed the important role played by his membership with the Club Managers Association of Europe.

“I always wanted to travel and test myself. I’ve done a lot of coaching then developed other facets such as project management and it’s just about adding strings to your bow all the time.”

With a population of some 24 million, Shanghai is proving a vibrant city to live in and McLoughlin believes golf is slowly opening up to more Chinese.

“I think golf in the Olympics will make it more popular and more affordable. Right now golf is still more elitist but hopefully that will change,” he added.