Britain in 2012 witnesses the wettest year since records began, which has consequently slashed revenue generation and visitor numbers at clubs. For some, the mixture of rain and London 2012 Olympics has been so damaging they have had to file for administration with some undergoing the process of liquidation.

One UK golf club operating manager that is using water to save £8,000 a year is Peter Townson of Surrey Downs. Read the article to learn exactly how they are using water to benefit the club financially.

2012 has been the wettest year on record, consequently slashing revenue collection and visitor numbers at clubs. This has been so damaging at clubs that some have had to file for administration, others undergoing the process of liquidation. 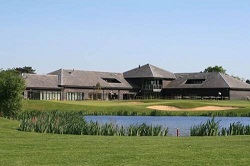 The collection of water on a course can be devastating, but if the water is funneled into a contained area, such as a storage lake, then the club can save money through the use of increased amounts of recycled water rather than buying from the main pipes.

Surrey Downs golf club is planning just that, and combined with a borehole, the club is expected to never fill the storage lakes from the mains again. This equals savings of £8,000+ a year, money that can be put into developing the club.