Woking Golf Club in Surrey (England), one of the world’s most architecturally significant golf courses, has begun work on a complete rebuild of its par three sixteenth hole. 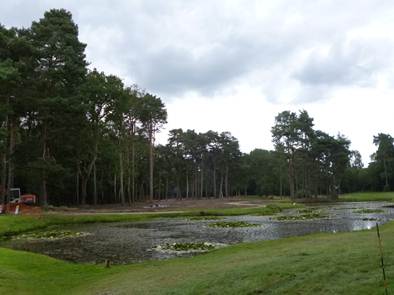 Woking Golf Club in Surrey, (England), one of the world’s most architecturally significant golf courses, has begun work on a complete rebuild of its par three sixteenth hole.

The oldest of the heathland courses in Surrey and Berkshire (England), Working is widley believed to be a key birthplace of strategic golf design, thanks to the work carried out on the course by members Stuart Paton and John Low around the turn of the twentieth century, notably the famous central bunker complex on the fourth hole.

Now, the club has hired local design firm Thomson Perrett & Lobb (CMAE Partners) to create a new-look sixteenth hole, as the existing green, which was extended backwards in the 1960’s has always had agronomic problems, as well as being rather close to the boundary of the property.

TPL principle Tim Lobb admitted the prospect of redesigning any part of a course as historic as Woking is a daunting one. “For golf architects, Woking is something of a temple, one of the places where our profession was created,” he said. “So to work here makes us proud, but is also quite intimidating.”

Unusually in this day and age, TPL’s new hole will be shorter than the existing sixteenth, around 140 yards from the medal tee, and 130 from the yellow markers, roughly, fifteen yards less than the current hole. The tees are moving slightly to the right, while the new green will be to the left of the existing one. The hole will still be played over a pond.

“I know it is more normal to lengthen holes, but in this case, designing the best hole in the location called for a slightly shorter one,” said Lobb. “Actually, through, I think it will strenghten the course as a whole by creating more variety. Woking lacks a true short par three, which the new sixteenth will become.”

Woking is famous for its greens, some of which are among the most severely contoured in Britain. “The new green will be in the Woking spirit, with significant contour and separate pinnable areas,” said Lobb. “The right third will slope away from the player, and create a challenging pin for competition days.”

Course manager Jon Day, along with Woking’s agronomist, Bruce Jamieson, and contractor MJ Abbott, who are handling the build, has sourced a special rootzone for the new green, designed to match closely the soil profile of the course’s existing greens. The green will be grassed with turf grown on the club’s very own nursey area, speeding the grow-in process. Construction should be completed by the end of September, and the new hole is expected to be in play by spring 2013.

Club captain Edward Luker said: “The rebuild of the 16th hole is the latest in a rane of improvements to the course that the Club has undertaken over recent years. It was critial that the redesign of the 16th maintains the fine heathland traditions of Woking Golf Club and we are very excited by the proposed design.”