With a limited budget, they have modernised old bunkers that went into disrepair and added a modern twist to the elegance 122 year old course.

After being amazed by the results, the club entered Golf Inc’s global contest, ‘Renovation of the Year’ and emphatically won, despite being the underdogs!

How did they win the contest?

Two things stand out when it comes to the outstanding renovation of the Richmond Golf Club course, outside of London: 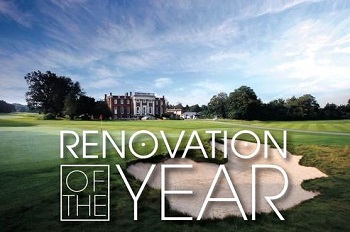 Architect Tim Lobb, figured he’d be up against some big-moneyed projects in Golf Inc’s Renovation of the year contest for 2012. Sure, rugged economic times have forced many clubs to downscale renovation projects, but many of this year’s entries still ran into the millions.

“I knew we’d be facing guys who spend $5 million or more, but we thought we did some pretty nice things,” said Lobb, of the design firm Thomson Perrett & Lobb, CMAE Official Suppliers. “We put a lot of effort into it.”

And it shows. As one of our judges said of the renovation:

“This is an extremely elegant solution to transform a course with a very limited budget. It show’s in dramatic fashion, how bunkering defines a course. For the club or owner wanting to make a statement, but faced with limited funds, this is a great example for one to follow.” 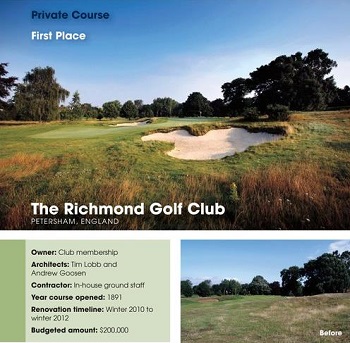 At Richmond, the problem was bunkers. Members had endured years of virtually unplayable bunkers. The course dates to 1891 and the bunkers looked as if they hadn’t been touched since then. They were so outdated that water would pool in them for weeks. Not only were they outdated, they were poorly positioned in some cases.

But the bad bunkers were just one part of the challenge. Lobb was not employing a contractor. The Richmond Golf Club’s ground crew was tasked with the renovation, which helped keep costs down tremendously. Lobb had no concerns about the crew’s ability to do the job, however. Plus his office is 30 minutes away. That allowed the architects to be at the site often helping direct the work.

“I’ve been in the business for close to 120 years,” he said. “And this was the best in-house result I’ve ever seen. It was stunning.”

The transformation of the course bunkers was a collaborative effort, Lobb noted. A Bunker Working Party, was created, which included club members, the club general manager and architects. The goal was to place the bunkers strategically, giving longer hitters a tougher go whilst allowing average golfers an easier route to the greens. 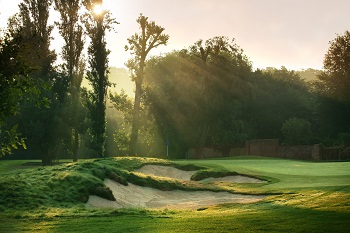 In all 56 bunkers were constructed. The work was done in two golfing seasons, during the slower winter months. Other improvements focused on the putting greens, tee boxes, and a few fairways. Some trees were removed as well.

“Everybody was on board. We wanted to make as big of an impact as we would with a modest budget. I think we did it.”

Indeed, his effort – funded by the smallest budget of all of this year’s entries – is the renovation of the year.

“For me it has been a Club project from the very start when we had our first presentation to the Membership.

The time and care taken by TPL to come up with a design that not only encompassed modern building techniques but remained sympathetic to both the feelings of the Membership and indeed the heritage of the Course.

It was this ‘can do’ attitude coupled with the extra-ordinary skill-set of the Couse Team, led by Les Howkins, which has made this such a successful project.  It is fair to say, when change is involved, that not all concerned will embrace it or indeed consider it necessary.

However, the feedback from Members and Guests alike has been truly incredible and continues to be received as the course beds in fully.”